We were honoured to be among the Finalists for the NSW Premier’s Multicultural Communications Awards (PMCAs), which recognise excellence in the multicultural media and marketing industry. 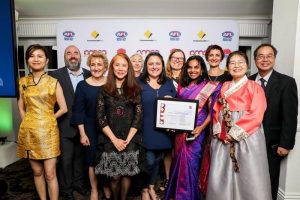 NSW is one of the most successful Multicultural states in the world and as the PMCA web page states: “it is important to celebrate the benefits of our diversity and recognise the valuable contribution multicultural media and marketing plays in our society by connecting people to their culture, identity, and language.”

Attendees of the Awards night were encouraged to wear their favourite traditional cultural attire and our Multicultural Access Project officer Sharitah donned a stunning purple sari with rose gold and pink accents for the occasion. 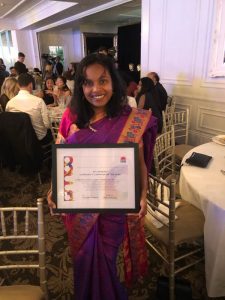 While the awards celebrate and recognise the important role journalists, editors and publishers in print, radio, television and digital media play, they also honour innovative and creative marketing campaigns that inspire social cohesion and community harmony – like ours!

The main aim of the Multicultural Dementia Campaign was to determine the best way to provide information on dementia to 5 targeted Cultural and Language communities in the Inner West: the Chinese, Greek, Italian, Korean and Vietnamese communities.

Consultations were undertaken with each community in the relevant community language. A total of 99 people from the 5 targeted communities participated in face-to-face group consultations, and a carer survey.

The findings showed how these communities needed and wanted the information communicated to them in their language and that they generally would like more information about dementia.

The second phase of the project used the recommendations from these findings. Expos were held for each of these 5 communities where information was tailor-made and delivered in ways that each community identified that they needed. At each, expo over 100 to 130 people attended and this was highly successful from a community engagement perspective.

We hope the award will further demonstrate the ongoing need for Culturally and Linguistically Diverse (CALD) communities to have information communicated to them in ways that are both culturally and linguistically appropriate.

This project also highlighted the importance of consultation with communities for effective communication and development of the capacity of individuals within that community.

Written by Efrosini Costa on December 9, 2019. Posted in Blog, Wordpress

Trackback from your site.